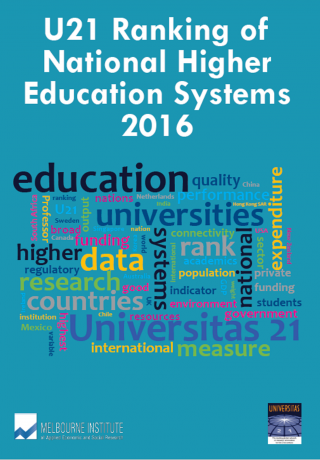 This report presents results for the 2016 Universitas 21 annual ranking of national systems of higher education and explains the methodology used to obtain the results. Our national ranking complements the plethora of rankings of institutions. The rationale for national rankings is that it is the higher education system as a whole, not only of research intensive universities, that matters for the economic and cultural development of a nation. Different institutions will contribute in different ways to achieving overall national objectives.

Fifty national systems of higher education, from all continents, are evaluated on the basis of 25 attributes. Variables are standardised for population size. Countries are ranked overall and in each of four areas: Resources, Environment, Connectivity and Output. Resources, whether public or private, are a necessary condition of a well-functioning system of higher education but they are not sufficient: a well-designed policy environment is needed to ensure that resources are used well. A consensus is emerging that the preferred environment is one where institutions are allowed considerable autonomy tempered by external monitoring and competition. The Environment module measures the extent to which national systems meet these criteria.

The Output measures encompass attributes such as participation rates, research performance, the existence of some world class universities, and employability of graduates. There is a world-wide trend for governments to encourage institutions of higher education to strengthen relationships with business and the rest of the community. International links are also important for the transmission of knowledge. Six such linkage measures are included in our Connectivity module.