How the world´s most improved school systems keep getting better 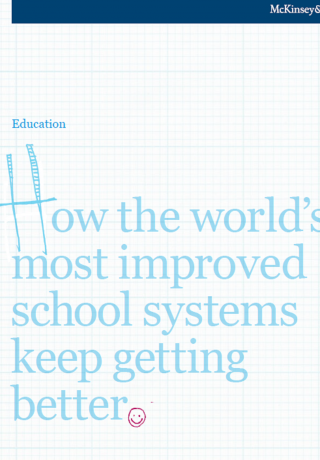 “There is a recent and rapidly growing appetite for figuring out and accomplishing what I call “whole system reform”---how to improve all schools in a district, a region, a state, province of country. For a long time, there has been the realization that better education is the key to societal and global productivity and personal and social well-being. Only recently are we beginning to see that interest turn into specific questions about how you actually go about whole system reform. What pathways, from what starting points, are going to get results in reasonably short time frames? How do we actually ‘raise the bar and close the gap’ for all students?
How the World’s Most Improved School Systems Keep Getting Better—a report that examines 20 systems in action-- makes a unique contribution to this critical global agenda. Building on their 2007 study but with much more precision, in this remarkable report McKinsey gets inside the pathways. It sorts out systems according to starting points and progression. These performance stage continua—from poor to fair, fair to good, good to great, and great to excellence—are in turn unraveled according to intervention clusters within given contexts. In each case it is very clear that all improving entities, even if their starting point is dismal, are led by a combinations of leaders who are self-aware that they are engaged in a phenomenon that the report calls ‘it’s a system thing’—a small number of critical factors that go together to create the chemistry of widespread improvement.
We see the clusters of interventions, different for those starting from a weak base than those who have already had significant success. We see the pathways playing themselves out in each type of context. We see what it takes to ignite system change, what specific strategies achieve breakthrough, what interventions build ever -increasing momentum, how systems can sustain improvement, and especially how they can go to the next stage of development.
As someone who has worked explicitly on system change in several contexts since 1997, including being directly involved in helping to lead whole system reform in Ontario since 2003, I can say that How the World’s Most Improved School Systems Keep Getting Better makes a one of a kind seminal contribution to this dynamic and critical field. It couldn’t come at a more propitious time. Finally, we are witnessing across the globe a robust anticipatory and proactive interest in OECD’s Programme for International Student Achievement (PISA). PISA is no longer just a ‘results phenomenon’. PISA leaders are increasingly getting at what lies behind the numbers and are thus generating key insights and questions. The How the World’s Most Improved School Systems Keep Getting Better report goes further, much further, in portraying the inner workings of successful pathways of reform given different beginning points.
We don’t have a perfect storm yet but there is one brewing. This report is invaluable for policy makers and school system leaders who are or should be crafting a roadmap for improving their specific systems. It furnishes a powerful analytical tool with its intervention data-base to help guide such action. It will stimulate a wave of further whole system reform efforts, and will be accompanied by an associated body of research that will help us assess and learn with very specific lenses provided by this report.
The world needs to become much more wise about what lessons to extract for systems at different starting points, both with regards to the ‘what’ and ‘how’ of system reform. This is no ordinary report. It has captured action in real time. It will, by its clarity and compelling insights, catapult the field of whole system reform forward in dramatic ways.
Michael Fullan
Professor Emeritus, University of Toronto
Special Advisor on Education to the Premier of Ontario

How the world´s most improved school systems keep getting better (4.42 MB)
Observatorios regionales